If you are using a screen reader and are having problems using this website, please call (323) 513-6222 for assistance.
Ticketed by AXS.com - Buy Tickets
search
close 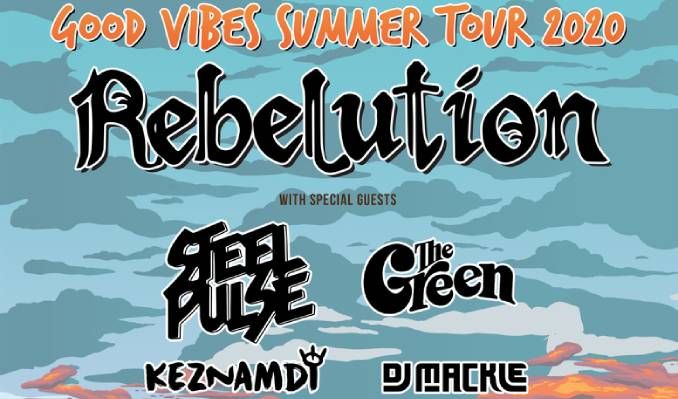 Sixteen years into an effervescent career, California reggae band and touring juggernaut Rebelution remains abundantly creative. Its members (singer/guitarist/lyricist Eric Rachmany, keyboardist Rory Carey, drummer Wesley Finley, and bassist Marley D. Williams) are as focused and committed as they are easygoing and laid-back. And they haven't lost a step since Falling Into Place, their 2016 studio album, became the band's fourth release to top the Billboard reggae chart, earning them their first ever Grammy nomination in the category of Best Reggae Album. Ever expanding and reaching wider audiences, the Rebelution phenomenon continues to spread good vibes on tour, and in the studio.

Free Rein, their sixth studio album, while still rooted in the Jamaican inspiration that Rebelution's songs and sounds have always paid homage to, takes experimental leaps and new adventures too, welcoming old fans and new audiences alike. The musicians collaborated with Jamaican artists on three of the 12 new tracks. Don Corleon (Sean Paul, Rihanna) produced "Rise On Top," a pointed reflection on celebrity and ambition; and Winta James, producer for Damian Marley and Chronixx, worked with the band on "Settle Down Easy" and "City Life," two songs that reflect a more confessional perspective.

"Celebrate," the new album's opening track, nods to the classic Rebelution sound. It has special meaning for the band too. In their long months on the road they've met fans with health struggles who've said that their music has helped them get through tough times. An energizing shout-out to one and all, the song celebrates the oneness of artist and audience.

"Patience," a reggae-R&B hybrid, is another hymn to human connection, a haunting message from the well of romantic love: "Maybe isn't good enough / I'm patient, I ain't giving up…Can I be your everything and more?"

Other tracks take a wider perspective. "City Life" is one that hits home for Rachmany. "There are moments," he says, speaking for urban dwellers everywhere, "when I just want to get out and find some solitude and find the beauty of mother nature." The uptempo groove conveys the positive energy of this universal desire.

The band remains in touch with the traditions that it builds on. Much of the style, the songwriting, and the quality of the instrumentals derive from Jamaican roots, says Rachmany, stressing what an honor it is that producers from reggae's birthplace signed on to work with Rebelution.

But every great band is its own life force as well, and the musicians of Rebelution take inspiration from other genres, including soul, r&b, and folk. "A lot of this album has to do with being comfortable in your own skin," the singer notes. In "Take On Anything," for example, "what I'm trying to get across is that it's OK to be different, different is actually a beautiful thing – if you're comfortable in your own skin every single day then you really can take on anything."

Manifesting the singer's love for acoustic guitar are two quieter numbers, one of which, "Healing," takes the long view: "I wrote that song to remind people that life is always worth living, and to provide some healing energy to a person listening." Again, always making that connection with the audience.

Rebelution formed in Isla Vista in 2004 when a group of college friends discovered a mutual love for reggae. After their debut album Courage to Grow reached #4 on the Billboard reggae chart, there was no stopping them. Many more releases followed, and in 2012 Peace of Mind debuted at #13 on the Billboard Top 200, hit #1 on both the Reggae and Independent charts, and was the #4 iTunes album overall. 2014’s Count Me In made an even bigger splash than its predecessor, entering the Reggae chart at #1 and the Billboard overall chart at #14. Then came the Grammy-nominated album Falling Into Place and the Rebelution concert experience, Live At Red Rocks.

With Free Rein, Rebelution is poised to continue spreading the joy. The band boasts an impressive 85 million spins on their Top 5 Spotify tracks alone, and will continue playing sold-out shows as well as taking the coveted headlining slots at some of the nation’s top festivals this year. Additionally, Rebelution continues to transcend the world of music and break barriers with their entrepreneurial prowess. They recently launched their own four-night destination event on the beach in Jamaica and released their customized cannabis oil battery pen, herb vaporizer, and oil, which are currently available in select dispensaries in California, Colorado, Nevada, and Oregon. The journey rolls on.

MySpaceAmazonOfficial WebsiteTwitterYouTubeFacebook
*Service and handling fees are added to the price of each ticket.